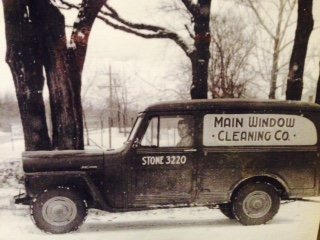 Main Window Cleaning of Rochester, New York, Inc.
Three Generation Family owned and operated.
Established in 1918
Offers close to 100 years of dedicated service that you can rely on from professionals who truly love what they do.

Coverage for all the required insurances.  We do not use Subcontractors.

Main Window Cleaning was started by Adam G. Kram who retired in 1962.  His son A. Edward Kram joined the firm in 1947 and became a partner in 1952.  A. Edward’s wife Connie resumed ownership after his Edward’s passing  in 1991. Connie retired and turned the Business over to her son Kevin in 1999. Kevin started working for Main Window Cleaning in 1969 and attended RIT to get his BS in Business Administration. His sister Lea became Office Manager, joined the firm in 1990.

The growth years were 1944-1964.  Adam and his son, A. Edward bought out seven window cleaning companies. There were Home, State, Central, City, East Side, and Raymond’s Window Cleaning.

Main Window Cleaning was the first Local Business to register with the Better Business Bureau. Over the years, the Company cleaned the windows of wealthy local family residences.

We have supported many local business over the years like the Memorial Art Gallery, National War Plane Museum, Chamber of Commerce, Rochester Museum & Science Center, and Rochester Philharmonic Orchestra.

Over the years we purchase many other local Rochester window cleaning companies including in:

For more information about who we are, how we help and what makes us the best choice when it comes to your windows, get in touch with Main Window Cleaning today and we’ll be happy to help. We can be reached by phone at 585-436-4340 or via email through our contact page.

Family-owned and operated since 1918